* In case of any delay in receiving the OTP, you may verify it later. Please proceed without verification.

Enter your City name or Pincode

The Barabati Stadium is one of the international standard cricket stadiums of East India. Established in the year 1958, the Barabati Stadium was named after the famous Barabati fort which is a landmark in the history of the city of Cuttack. The stadium is said to be one of finest stadiums of the country with a capacity of more than 50,000 spectators. It is managed and operated by the Orissa Cricket Association (OCA). The stadium has witnessed several domestic, national and international cricket matches and has been a favorite spot for many famous cricketers. It is one of the most memorable stadiums in the history of the Indian Cricket as it has hosted the only third One Day International (ODI) played in the country in 1982. The Barabati Stadium also marks the 300th Wicket taken by Kapil Dev on this ground in a match played against Srilanka. 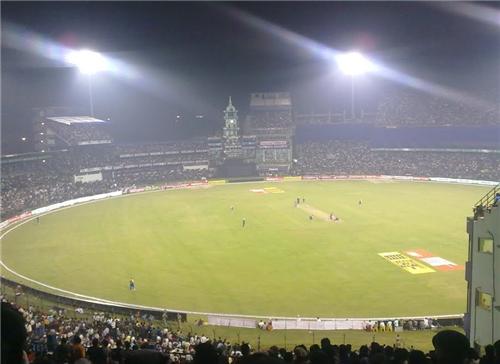 Post independence the historian Chief Minister of Orissa, Shree Harekrishna Mahtab envisioned an idea of Converting the great Barabati fort into a memorial for all those Oriya freedom fighters who sacrificed their life for the nation. He also had the dream of converting the entire ground area into a huge sports complex. Then later in 1948, there was a big football match that was supposed to be played between the Bhawanipur Football Club and Orissa XI. Shree Harekrishna Mahtab was the chief guest for the event and in that even he noticed the huge emergence of crowd and the ground was incompetent to occupy them all. Hence from there the got the idea of building up a stadium along with a sports complex and he announced his plan there itself. In 1950 the foundation of Barabati Stadium was been laid and the construction started. Mr. Bhairab Chandra Mohanty who was the Deputy Minister of Orissa was brought as in charge for the construction of the stadium. Mr. Mohanty became very much emotionally attached to the project and the work began with full fledge.
The project included the construction of a big field, clubhouse, pavilion, clock tower and architecturally designed gates of entrance into the stadium. With all that, there were also provisions to construct buildings for the stay of the players when they visit here for matches. There was supposed to have the huge galleries all around the ground for the spectators to watch the matches being played. As the project was huge and needed a lot of funding and this was of course not affordable for the Orissa Government of that time. Hence as suggested by Mr. Bhairab Chandra Mohanty, to organize a Barabati Raffle (Lottery) and the tickets were being sold massively all over the state. The profits that came in huge amount were invested in the construction of this dream project of Orissa.

Hockey and football of national and international level were the major sports being organized here. The major transformation took when the flood lights were installed in the stadium campus which made the stadium much attractive and very much useful. Later on it was converted into a cricket stadium with and several domestic, national and international matches were being played on it since then.

Some of the Records and Statistics of the matches played at The Barabati Stadium in the past.

One Day International Stats
First ODI was Played on January 04, 1987 between India and Sri Lanka where India won by an innings and 67 runs.India has the record of being the most Most Successful Team on the Ground. India has the record of scoring the Highest Team Score by any team on the ground of Barabati with 400 runs and it was made against Srilanaka. The lowest Score by any team on the ground is 142 all out, which was made by Sri Lanka against India. Dilip Vengsarkar is the Most Prolific Batsman on Barabati Ground with 166 Runs and Narendra Hirwani is the Most Prolific Bowler with 6 Wickets in an ODI at Barabati. Again Dilip Vengsarkar has the Highest Individual Score in matches played on this ground which is 166 runs in an ODI. The Best Bowling record is by Narendra Hirwani which is 6 wickets at the cost of 59 runs.

Test Matches Stats
First Test Match was Played on January 27, 1982 between India and England where India won 5 wickets. India has the record of being the most Most Successful Team on the Ground and also has the record of scoring the Highest Team Score by any team on the ground of Barabati with 301/3 in 50 Overs against Zimbabwe. The lowest Score by any team on the ground is 113 all out made by West Indies against Australia in 34.2 Overs. Sachin Tendulkar is the Most Prolific Batsman on Barabati Ground in test matches with 469 Runs and Anil Kumble is the Most Prolific Bowler with 7 Wickets in a Test match played at Barabati. Mohammad Azharuddin has the Highest Individual Score in test matches played on this ground which is 153 runs. The Best Bowling record is by Daren Powell which is 4 wickets at the cost of 27 runs in a match played against India.